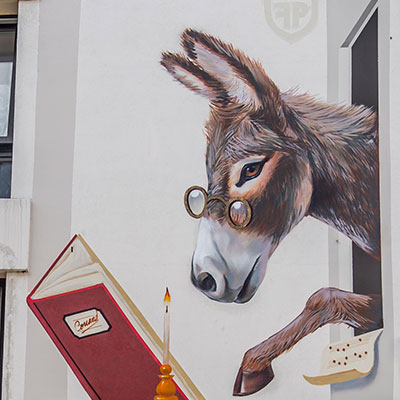 To mark the 450th anniversary of the death of the painter Pieter Bruegel..

“The Ass in the School”

“I chose to reboot ‘The Ass in the School’, which depicts a teacher in the middle of a rather hectic class. I liked the reference because of its humorous side. At first, I wanted to depict the tumultuous side with all the children. Later on, I preferred to focus on the most wacky and symbolic aspect of the reference work, namely the donkey that can be seen sticking its head through a window. I made this choice partly because of the size of the wall and its position, which I felt deserved a strong and visible element, rather than losing passing spectators in an overloaded composition. Moreover, I didn’t want to include certain elements of the original work which I thought would be questionable for a passing spectator, such as the teacher spanking a child. As such, I focused on this central element and gave suitable attention to the details. In order to frame and enhance my work, I will put my donkey in a false perspective, by simulating wall edges on the back wall, so that you might have the impression that the donkey is coming out of the wall.”