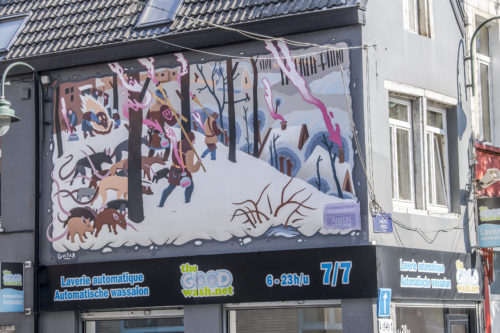 To mark the 450th anniversary of the death of the painter Pieter Bruegel.

Inspiration: “The Hunters in the Snow” (Painting)

“Statement of intent: “I was immediately attracted by the composition and atmosphere of this scene. Even though it is a scene of everyday life, a surrealist atmosphere pervades. I decided to focus on the hunters and their dogs. By retaining the compositional elements, I transformed the subject and the graphic aesthetic. The scene depicts rat hunters pursued by their quarry, all in a fluffy universe which resembles a dream. It’s a kind of surreal allegory of the absurd.”