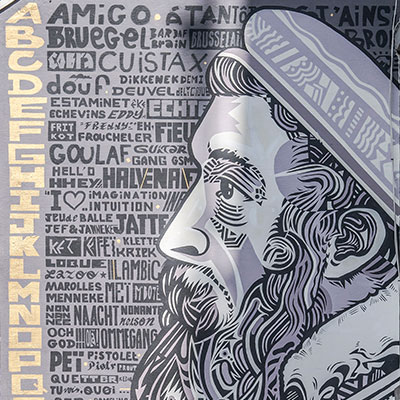 To mark the 450th anniversary of the death of the painter Pieter Bruegel.

“Having been assigned this wall, in vertical format and visible from afar, I had to find an image with an impact from far away, that becomes clearer and more complex as you approach it. As I have a tendency to overload my creative process, I wanted to move away from the artist’s characteristic complex compositions.

The engraving of Pieter Bruegel therefore seemed obvious to me.

This official self-portrait of the artist is an iconographic image that allows us to recognise him immediately. Thanks to the engraving process, the work has survived the ravages of time and has been re-interpreted by various engravers. As an artisan 2.0, as I like to define myself, I wanted to reinterpret this portrait in my current graphic style, which incorporates clear lines, abstract forms and tribal references.

This is because the background of the original work was composed of horizontal lines, and I knew that Bruegel was a brilliant adept in expressions and puns (“Netherlandish Proverbs”). I had fun creating an alphabet book using local words and expressions from the Marolles and Brussels. Research led me to select around a hundred words from both the “Zwanze” of the former Marolles residents and contemporary expressions from the cultural diversity of the district.”