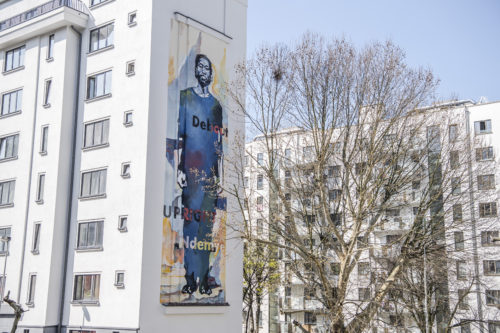 Muyira Arts et Mémoire
Founded in 2014, Muyira – Arts et Mémoire is a non-profit association whose activities are based around two main strands. The first strand relates to the memory of crimes of genocide and crimes against humanity. A specific component is devoted to the genocide perpetrated against the Tutsis in Rwanda in 1994, and officially recognised by the bodies of the United Nations. Muyira proposes various pedagogical approaches, including artistic expressions as tools for transmission and reflection on these crimes. It extends its actions to the fight against all forms of racism, xenophobia, sexism and homophobia. The second strand of the activities of the association relates to artistic creation and dissemination in various forms.

“Upright.Be” project
Upright.Be is a project organised by the Muyira- Arts et Mémoire non-profit association and based on the Upright Men concept by the visual artist Bruce Clarke. Twenty-five years after the Rwandan genocide, this work aims to keep the memory of the victims alive. The project involves painting a permanent figure of an upright man on a Brussels facade, and organising cultural and educational activities around the work.
Upright Men is a visual arts project, for the memory and dignity of victims of crimes against humanity and genocide, the result of a long reflection by Bruce Clarke on power relations and racism. The project was set up to honour the victims of the 1994 Tutsi genocide in Rwanda, in response to the request of the CNLG (Commission Nationale de Lutte contre le Génocide du Rwanda) to find artistic forms related to the work of remembrance, which could be presented during the ceremonies commemorating the Tutsi genocide in Rwanda. The project consists of painting figures of men, women or children, but larger than nature – up to 10 metres tall. These figures will appear to passers-by as silent but personified images, sketched but outlined silhouettes, anonymous but familiar characters, symbols of the dignity of human beings confronted with the dehumanisation that genocide entails. These standing people are witnesses to a painful history. The aim is to give a presence back to the people who disappeared, to restore the individuality of the victims, and give them back their dignity.
In the run-up to the 20th anniversary of the Tutsi genocide in Rwanda, the Upright Men appeared in various places around the world. The aim was to introduce the history of the genocide in Rwanda to the international community, to raise humankind’s awareness of the events of 1994 and to create a bridge between Rwandans and the rest of the world. In this context, a highly symbolic exhibition of Upright Men on kakemonos was displayed on the façade of the Brussels City Museum on the Grand Place. It is a temporary work, although the preference of the Muyira- Arts et Mémoires non-profit association, the visual artist Bruce Clarke and the City of Brussels, was to create a more permanent work. This wish was granted thanks to Logements Bruxellois, who graciously lent a facade of one of their buildings for the realisation of this important work