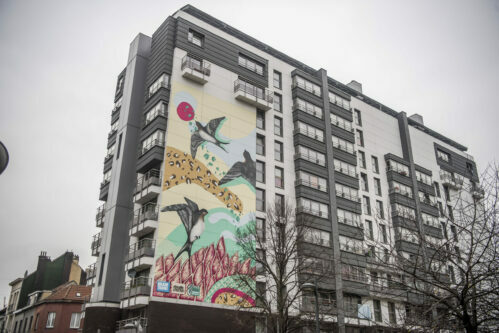 Up! is a mural painted by the artist Jana Danilović (from Serbia) as part of the Balkan Trafik festival, organised by the non-profit association ‘1001 valises’.
The work is inspired by and based on universally recognisable symbols and themes.
Birds are used as the main motif, symbolising freedom. Swallows, in particular, are affectionate, peaceful and playful creatures. Despite their apparent frailty, they are capable of flying thousands of kilometres.
The background of the mural has been created through the interplay of surfaces and coloured patterns which provide rhythm to the work, making it dynamic and playful.
The pale blue surfaces represent the sky, another universal symbol – it is both limitless and filled with hope.
The general idea behind this work is to give the façade a refreshing and yet peaceful air.
The mural delivers a stimulating metaphorical message: despite appearances and however small and fragile, an individual can fulfil their dreams – the sky is the limit!