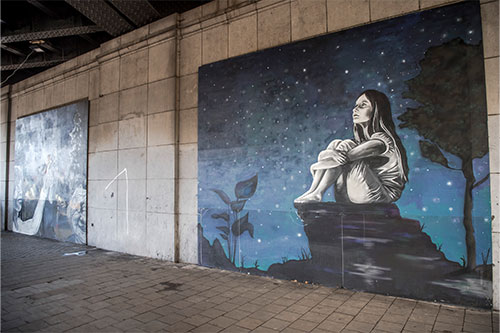 “Women, stand up and unite for the world of tomorrow! Through education, intergenerational solidarity, imagination and dreaming, you will help change mindsets.”

Through focus groups conducted in 2021, women in the neighborhood spoke about the need to reclaim public space.

A fresco created by the artists Zouwi and Soaz in collaboration with La Belle Hip Hop, Bravvo and PARCOURS Street Art and with the support of Hub.Brussels, the STIB and Infrabel.

“Looking at the mural from left to right, the project deals with several ideas that emerged from the workshops. An important factor in this transition is the role played by education. Women no longer feel oppressed and tired of having to manage everything… they must teach their children that another reality is possible. In fact, we have noticed that this is happening because the young girls in the workshops have not experienced the same problems, they see themselves rather as queens and diamonds. They learn that women can work in jobs that were traditionally reserved for men and vice versa.
The woman on the left therefore represents this queen who is searching for knowledge and escape through reading.
In the centre, we decided to show that from one generation to the next, we have to stick together, to be united in order to move forward. We placed them in front of a backdrop of one of the streets of the Annessens district in the evening. In the workshop, the women expressed a fear of walking through the dark streets of the city centre at a certain time at time. And yet once united, they feel safe.
Then on the right side of the wall, we have painted a representation youth: a young girl, lost in thought, looks upwards to the starry sky while drawing on her imagination and dreaming of her future which rests in her hands”.